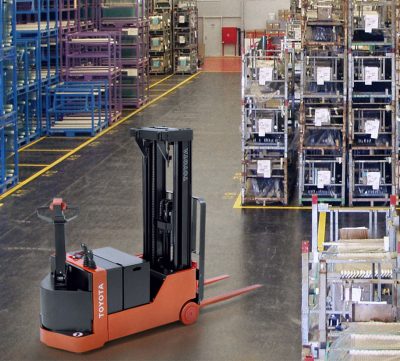 The Warehouse of the Future

Conceptualizing the future state of material handling is no easy task. After all, how much could you possibly improve the highly automated warehouses of today? The A.I. TeamLogistics Concept from Toyota Material Handling does just that by visualizing how connected vehicles could use advanced technology to deliver a continuous flow and optimized logistics operations.

The concept of automated forklifts performing material handling tasks is not new, but the A.I. TeamLogistics Concept takes it a step further by visualizing how advanced artificial intelligence could optimize warehousing efficiency and productivity. At the core of the vision are four new concept vehicles:

Each of these units work together using on-board intelligence developed in conjunction with Microsoft. The ultra-lifter and mid-lifter vehicles pull pallets from racking while the pallet drone and swarm coordinate horizontal transportation of the pallets to their final destination. The machines are able to reason, communicate, and perform with human-like agility, allowing for seamless coordination and optimization of workflows.

This type of direct communication between machines could mean that traditional central warehouse management system control will no longer be required, thereby reducing labor and overall operating costs. Simultaneous coordination between the various vehicles would mean having the right truck used for the right task completed at the right time, every time. This type of reduction in waste and energy use could result in significant cost savings and throughput in warehousing and distribution environments.

Although the concept could be reality by 2028, a proof of concept may be developed much sooner. The concept is also one of many collaborations between Toyota Material Handling and Microsoft and one example of how artificial intelligence could have a significant impact on the material handling market for years to come.

Wondering how you can maximize productivity and be regulatory compliant? Find out how you can train with us!